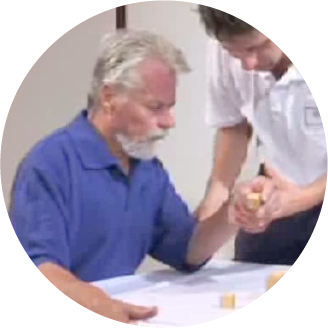 The ArmeoPower has been specifically designed for arm and hand therapy in an early stage of rehabilitation.

The device enables even patients with severe movement impairments to perform exercises with a high number of repetitions (high intensity), which is paramount for relearning motor function. 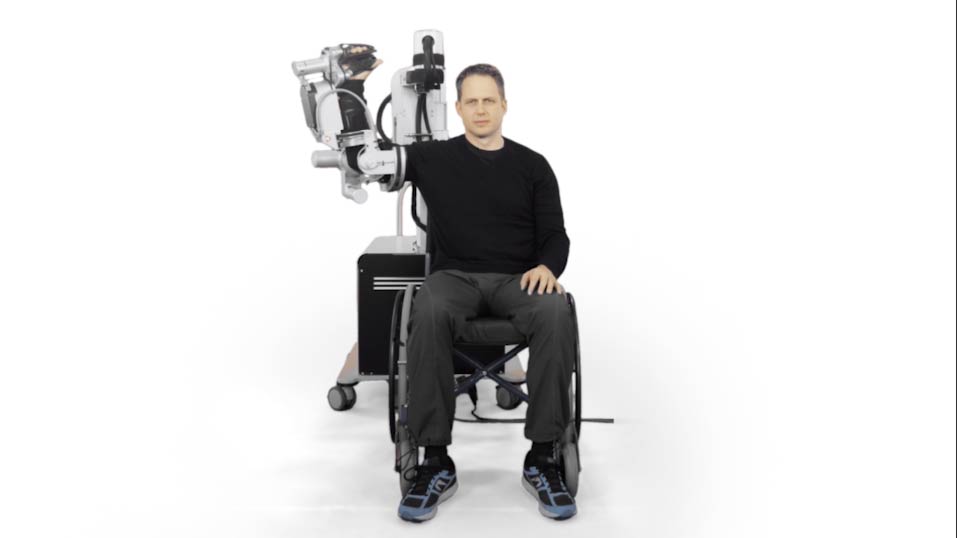 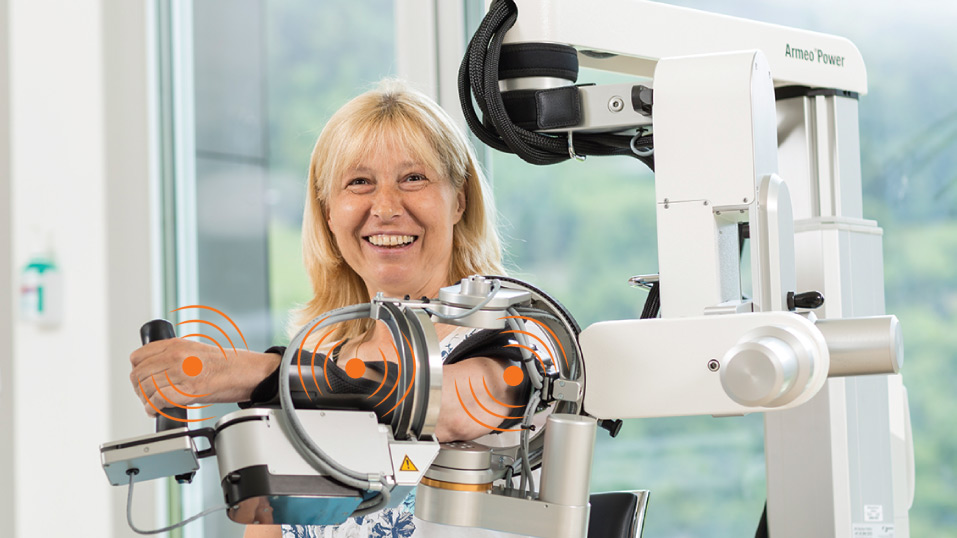 The ArmeoPower uses sensors and intelligent algorithms to recognize when the patient is not able to carry out a movement and assists the patient’s arm as much as needed to successfully reach the goal of the exercise.

It automatically adapts the arm movement guidance to the individual needs and changing abilities of each patient–from full movement guidance for patients with very little activity to no support at all for more advanced patients. This assist-as-needed movement guidance enables and motivates patients to participate actively in their training, which effectively supports motor relearning.

This enables patients to practice the movements important for their therapy progress and daily life. The ArmeoPower supports 1D (joint-specific), 2D and 3D movements. 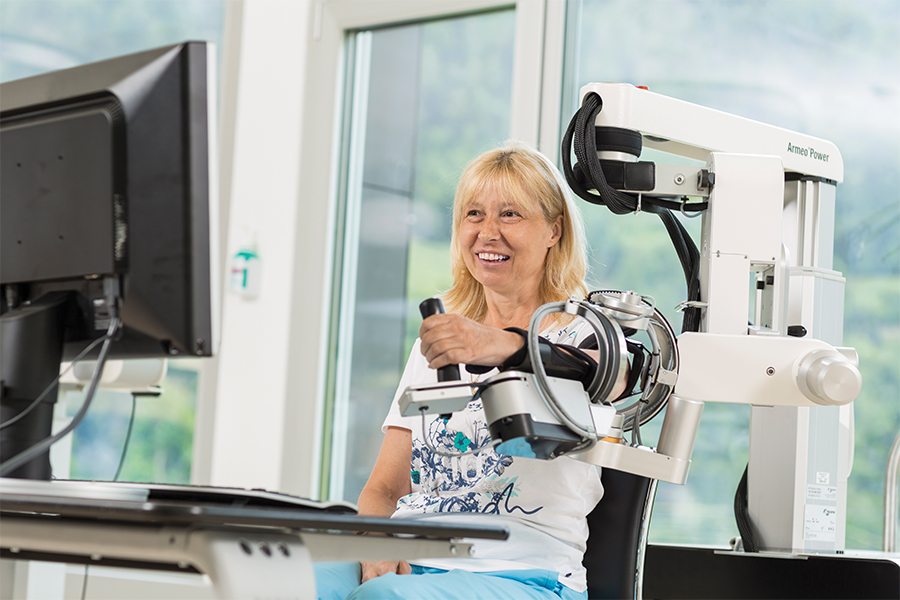 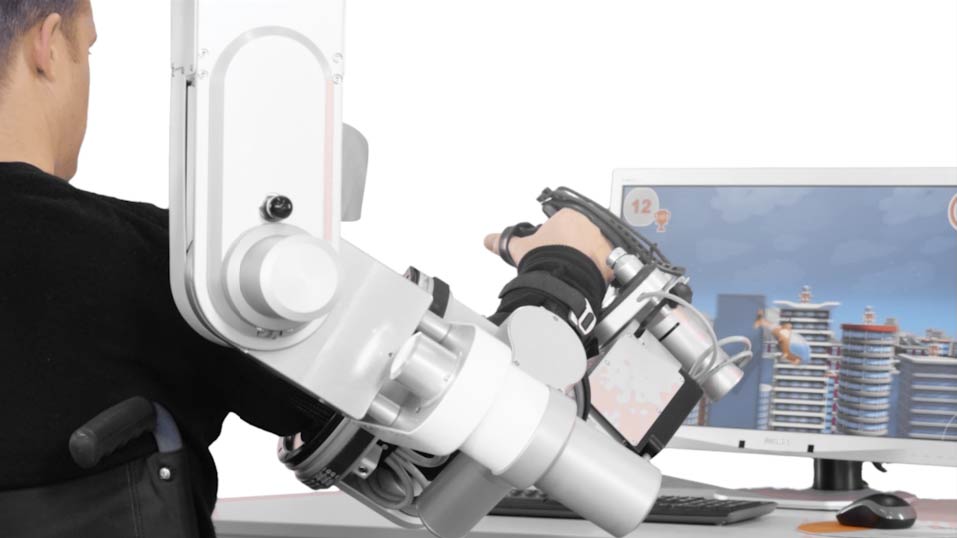 An extensive library of game-like Augmented Performance Feedback exercises has been designed to train core movement patterns that are commonly used in activities of daily living.

The Armeo devices improve therapy efficiency by reducing the therapist’s physical effort and the need for continuous therapeutic guidance.

Moreover, Armeo devices enable therapists to make better use of their clinical know-how and expertise, by focusing on the optimal therapy planning, instead of manually delivering many repetitions. 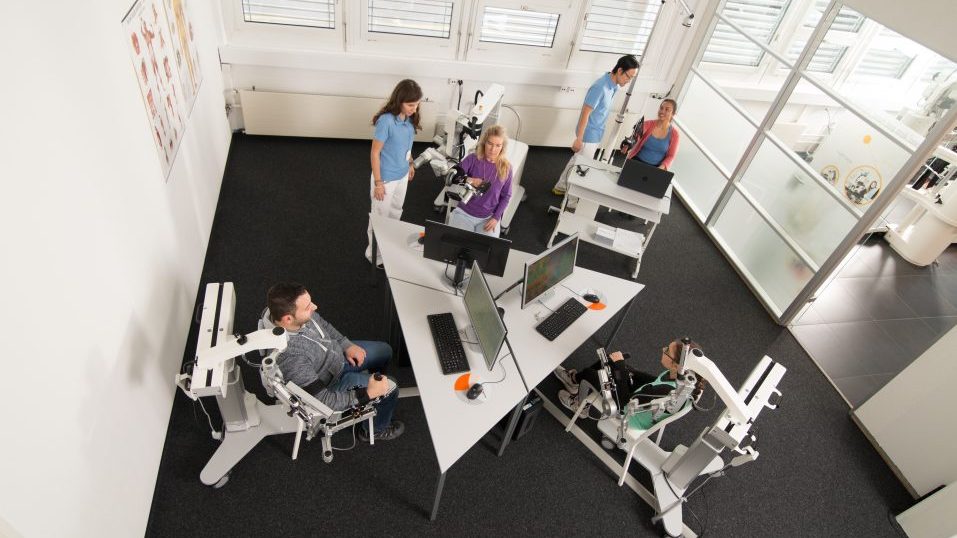 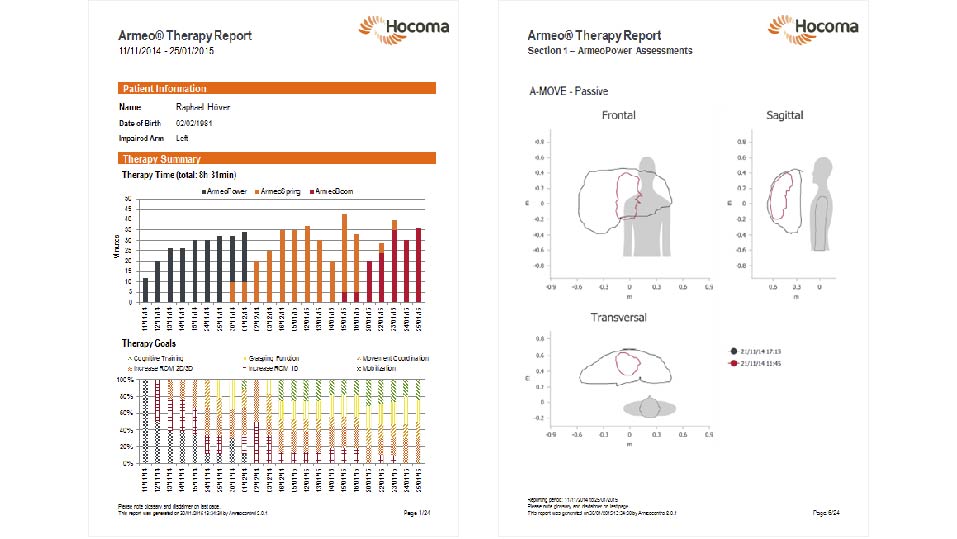 The ArmeoPower precisely records how patients perform during their therapy sessions and how much support they need.

Standardized Assessment Tools evaluate the sensor and motor data to investigate specific patient function including movement ranges and forces. The results can be used to analyze and document the patient’s state and therapy progress in order to further optimize therapy. Results can then be shared with the patient and other clinicians. 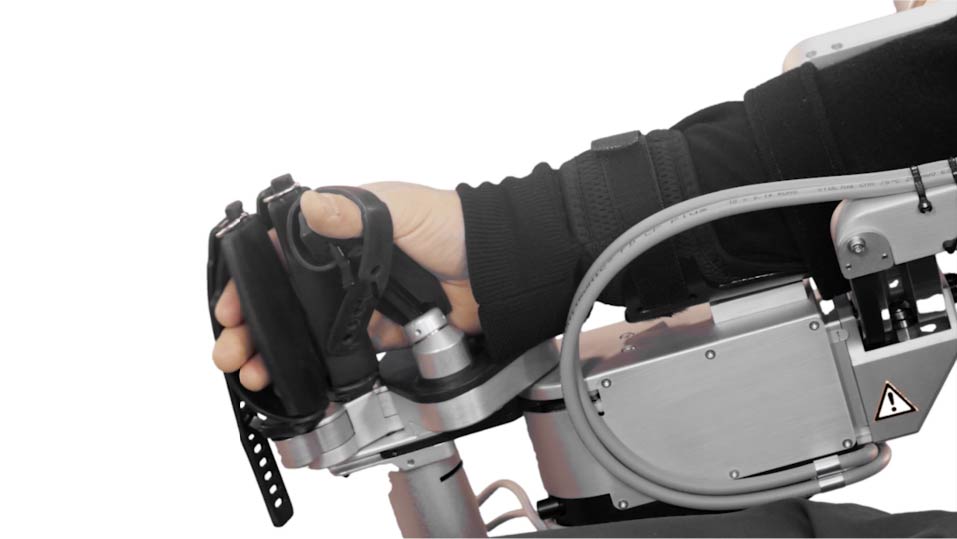 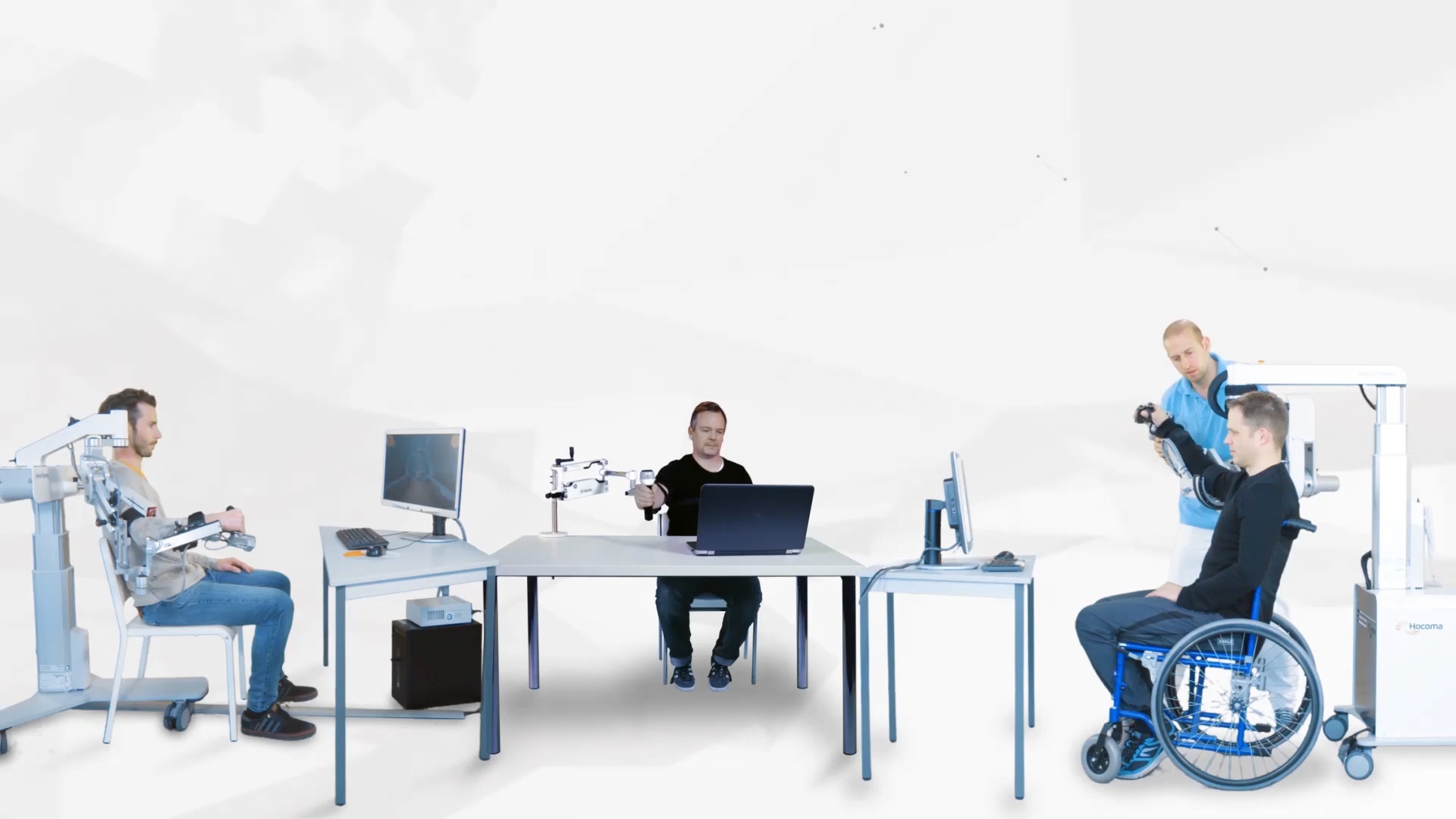 Part of a Modular Therapy Concept

The ArmeoPower is part of the unique and modular Armeo Therapy Concept, the world’s first upper extremity concept that covers the whole “Continuum of Rehabilitation” throughout a range of devices, each developed for a specific stage of rehabilitation–from acute rehabilitation to long-term recovery.

I Proved Them Wrong
After a car accident, doctors thought he would never walk or talk again. Samuel Pace arrived at MossRehab in Pennsylvania, USA, with almost no movement in his arms. At the rehabilitation hospital he started with occupational therapy where he had the possibility to train with the ArmeoPower for the first time. During therapy he started to use his arms again: “My arms had very limited movement and as the time went on with the machine I got a lot more movement. I know it worked!” According to the therapist, the ArmeoPower at MossRehab is used for patients with all kind of neurological diseases. “It allows patients to practice specific skills such as grip strength, functional reach, and it’s more engaging because it’s task-oriented activity,” Samuel's therapist said. “Overall, the good thing with robotics is you can get increased repetition. So, more movement, more muscle contractions in a shorter time.”
Samuel Pace
Patient

Benefits of the ArmeoPower are Recognized All Over the World

0 Devices Worldwide
In 158 Facilities
Find an ArmeoPower Near You

ArmeoPower is a highly advanced arm and hand rehabilitation device for early-stage patients even before they develop active movement. 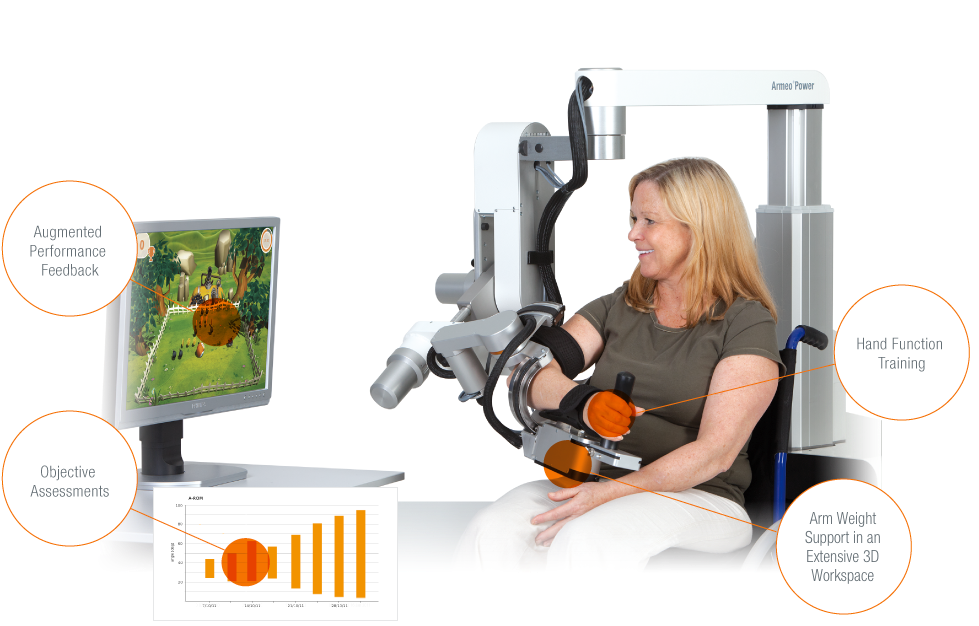 Scientific Evidence of Arm and Hand Rehabilitation with ArmeoPower

More than 100 studies have been conducted on the ArmeoPower, including the research versions of the device.

The ArmeoPower uses sensors and intelligent algorithms to recognize when the patient is not able to carry out a movement and assists the patient’s arm as much as needed to successfully reach the goal of the exercise.
(Nef et al. 2009)

In a large, randomized controlled trial in patients with stroke, those most severely affected profited most from the robotic arm training.
(Klamroth-Marganska, V., et al. 2014) 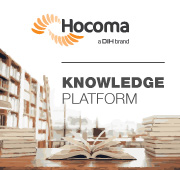 All our solutions have been thoroughly tested and researched. Numerous studies have proven them to be effective. On our Knowledge Platform we provide an overview of all studies.

To find out more, visit knowledge.hocoma.com >

“We know the literature for neuro recovery of the upper extremity supports repetition, intensity, and salience. The ArmeoPower allows for application of these principles for patients of all impairment levels in a variety of methods by allowing the clinician to customize each session for patient need. As a result, the patient has a positive experience with this engaging technology and receives feedback on performance.”
Meredith Mayton
OTm MOT, OTR/L Team Lead, Sheltering Arms Hospitals, USA
Patients Will Greatly Benefit
“We know that patients with hemiparesis will greatly benefit from integrated movement rehabilitation techniques, but we had no concrete options for this approach so far. But now, ArmeoPower offers us for the first time a technology that enables us to achieve this goal by intelligently supporting the complete movement chain from the shoulder to the fingers.”
Prof. Alberto Esquenazi
Chief Medical Officer, MossRehab, USA 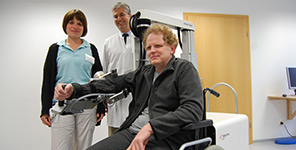 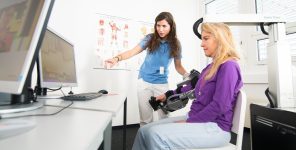 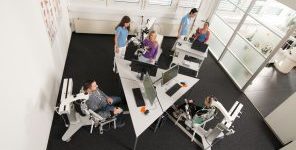 Enables Therapist to Supervise More Than One Patient at a Time

“In a way, 3D-robots plus games becomes your own arcade that is customized to you as the patient. I just don’t see where that is anywhere comparable to about twenty repetitions that are done by a therapist holding your arm. So it’s a qualitative difference.”

Supporting the Recovery of Arm and Hand Functions

Sign up to our newsletter to receive the latest news in rehabilitation technology, innovation and product updates from Hocoma.
Scroll to top