The Swiss-based medical technology company Hocoma launches the next generation of its rehabilitation robotic device Erigo®Pro in the U.S. The new ErigoPro further improves mobilization and verticalization of patients with circulatory, neurological or musculoskeletal conditions through integrated Functional Electrical Stimulation. With this advanced new feature, the ErigoPro is an ideal addition to acute care rehabilitation programs. The first Hospitals in the USA implementing the ErigoPro in their daily clinical routine are Craig Hospital in Denver, CO and the Shepherd Center in Atlanta, GA. 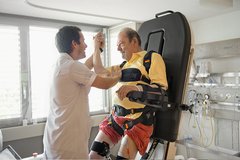 Volketswil near Zurich, Switzerland – July 29, 2014 – Prolonged bed rest due to stroke, traumatic brain injury or spinal cord injury can cause adverse effects such as cardiovascular, respiratory and musculoskeletal deconditioning. It also increases the risk of medical complications such as deep venous thrombosis or infections. Scientific evidence suggests that mobilization and verticalization of neurological patients at an early stage is crucial to counteract these negative effects 1,2.

Benefits of Integrating New Technologies into Clinical Routine
Prior to the introduction of robotic tilt tables such as the Erigo, mobilization of patients with neurologic lesions was a labor intensive and physically exhausting task. Manual mobilization only has a limited impact on the cardiovascular system and does not support stabilization into an upright position. Even conventional tilt table training has its limitations due to its static element, limited training duration and an increased risk for syncopes and secondary brain damage through circulatory instability. With the integration of robotic tilt tables such as the Erigo, mobilization of patients could be further improved and the physical strain on therapists was highly reduced. Together with FES, the new ErigoPro now offers additional benefits and therapy options in clinical routine. In combining mobilization with robotic leg movement and cyclic leg loading, ErigoPro increases tolerance to an upright or standing position in patients with circulatory, neurological, or musculoskeletal conditions by enabling the central nervous system to be stimulated and activated.

Erigo FES3
Electrical stimulation is an established method for targeted muscle activation. By adhering electrodes to the skin, nerve endings are stimulated with electricity causing the contraction and activation of muscles that cannot be controlled actively due to a neurological dysfunction. Together with cyclic movement training, Erigo FES efficiently supports the increase of blood flow in the patient’s lower extremities, which helps to maintain the stroke volume and blood pressure, therefore further improving the orthostatic tolerance during verticalization (fig. 1 and fig. 2).4 It has also been shown that therapy with the Erigo FES improves the cerebral blood flow and muscle strength in lower extremities.5 This can specifically support recovery of leg muscle function.

Positive Effects on Therapy Outcome
The activation of the central nervous system with ErigoPro therapy is not only intended to have a positive effect on the patient’s tolerance to an upright or standing position but to reduce spasticity in neurological patients as well. Furthermore, ErigoPro can be used to prevent or retard disuse atrophy and to maintain or even increase the range of motion of leg joints. Clinicians such as Karin Diserens, MD, Head of Acute Neurorehabilitation at the Department of Clinical Neuroscience at the CHUV (Centre Hospitalier Universitaire Vaudois) in Lausanne, Switzerland, highly values the benefits of the new ErigoPro: “We note a direct link between the intensity of the sensorimotor stimulation with the ErigoPro during therapy and the recovery process of our neurological patients.”

Easy Integration into Clinical Routine
Besides therapy enhancement, the latest version of the ErigoPro also offers high usability and comfort thanks to advanced features such as a flexible patient harness and an intuitive user interface allowing full therapy control. The new compact and flexible product design makes the device easily transportable and supports the close interaction between the patient and the therapist. The new upholstery, specifically tailored to intensive care needs, as well as the side rails to which additional hospital equipment can be safely attached, further increase the usability of the device in acute care.

The Erigo FES is fully synchronized with the robotic leg movements. Up to eight FES channels can be operated easily by the therapist on the touchscreen of the Erigo and adjusted according to the patient’s motor abilities. 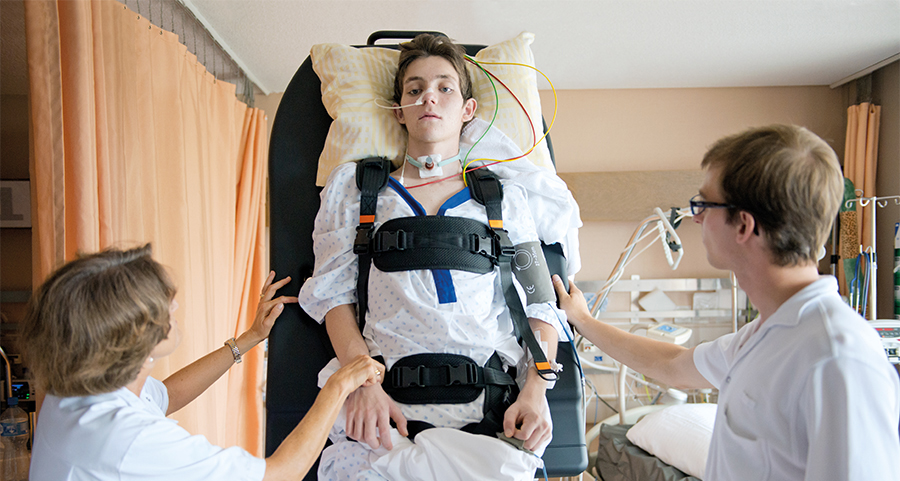 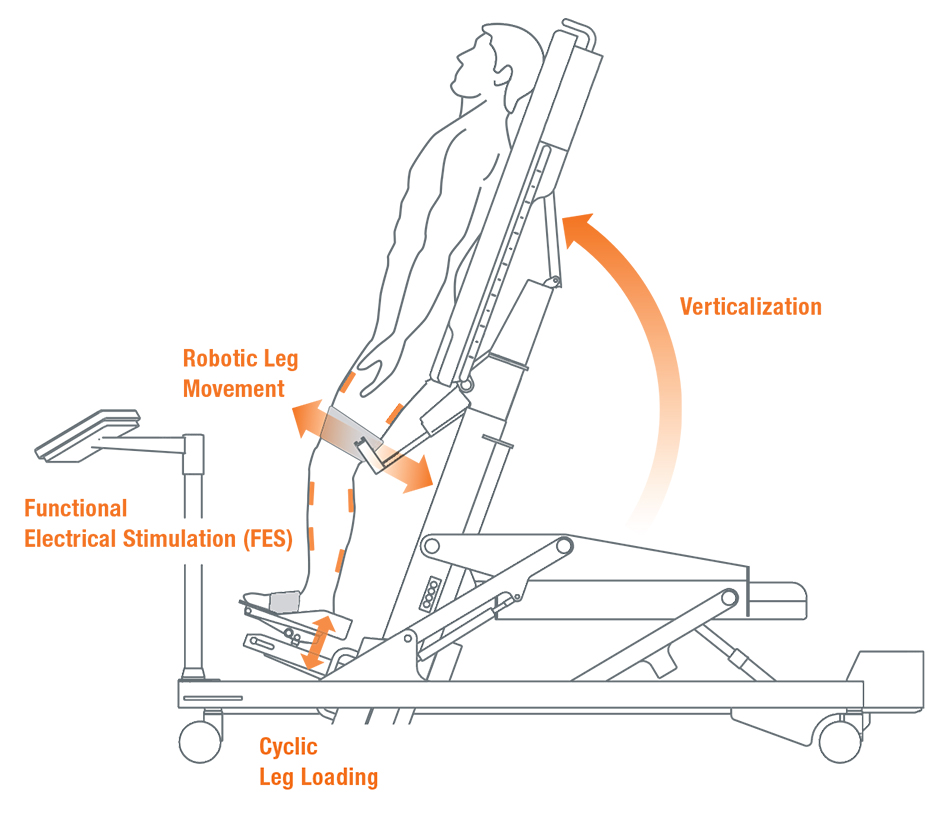 Hocoma was set up in 2000, as a spin-off of the Swiss University Hospital Balgrist. The company currently employs more than 160 people at its headquarters near Zurich, Switzerland and at its subsidiaries in the US, Singapore and Slovenia. Hocoma is the global market leader for the development, manufacturing and marketing of robotic and sensor-based devices for functional movement therapy. Therapy solutions support the treatment of neurological patients with movement disorders caused by stroke, spinal cord injury, traumatic brain injury, multiple sclerosis, cerebral palsy or other neurological diseases and injuries as well low back pain patients. The product range features devices for intensive gait therapy (Lokomat®), functional therapy of the upper extremities (Armeo®), early rehabilitation and patient mobilization (Erigo®) as well as functional movement therapy within low back pain treatment (Valedo®) at home and at the therapist’s office. Hocoma’s products are applied successfully in clinics and research institutes worldwide. The medical technology company has received many awards and was honored with the “Red Herring 100 Global Award” in January 2010, as one of the hundred most innovative companies worldwide. Hocoma generated a turnover of more than 30 million CHF in 2013. Dr. Gery Colombo is the CEO of Hocoma AG.